STORE
You are here: Home1 / STORE2 / Genium3 / Sandro Cleuzo | MY APPROCH to character design and Animation
BUY HOW TO

Sandro Cleuzo | MY APPROCH to character design and Animation

Learn step by step the process Sandro Cleuzo uses to create his characters and animations.

“Through this book I want to show my personal approach to this art, hoping to inspire you to find yours” Sandro Cleuzo 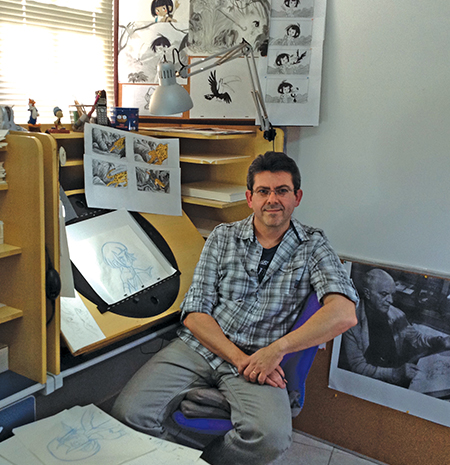 I was born in Sao Paulo, Brazil.

At the age of 14 I acquired the famous Preston Blair book and began learning animation through the principles in it.

By the time I was 15, I was able to get an internship at one of the most prestigious animate studios in Sao Paulo.

I worked there for 4 years- first as an inbetweener and 2 years later as an animator on many TV commercials.

Since I did not attend an art or animation school, I learned on the job. Around the same time I started my internship, I also started to freelance as a comic book artist on a new comic character created by a famous Brazilian cartoonist.!

After a few years of animating on TV commercials, I felt I was ready for the next step: Feature Films.! ! Since I was a big fan of the work of from the Don Bluth Studios, specially the film “The Secret of Nimh” and the video games “Dragon’s Lair” and “Space Ace”, I flew to Dublin, Ireland where the studio was located, and applied. To my surprise I was hired as an animator. It was 1990 and I was 19 years old. I spent 4 years in Dublin, then 2 more years once the studio moved to Phoenix, Arizona where they setup Fox Animation Studios. There I worked as a Directing Animator on the feature “Anastasia”. In 1997 I began working as an animator at Disney Feature in Burbank on films like “Fantasia 2000” (the Firebird and Tin Soldier Sequences), ”The Emperor’s New Groove” (as a Lead Animator), “Tarzan” (as an additional Animator) and “Home on the Range” (as a Supervising Animator). During the final stages of production on “Home on the Range” I relocated to Disney Feature in Florida to get ready to start working on what would have been their third full feature film , “A Few Good Ghosts”. Unfortunately , the project was cancelled and the studio closed down. I then decided to return to my hometown in Brazil. I worked there as a freelancer on several TV and feature film projects including “Enchanted”, “The Proud Family”, “Axterix and the Vikings”, “Chico and Rita”, among others. Later, I went back to Disney to animate on “The Princess and the Frog” and then over to Dreamworks to help animate on the hand drawn short “Kung Fu Panda The Secrets of the Furious Five”. Then to Duncan Studios to supervise the animation on Dreamworks next hand drawn shorts “How to Train Your Dragon – The Legend of the Bone Knapper” and “KFP The Secrets of the Masters”.Most recently I have been animating at Dreamworks on the CG/Hand drawn film “Me and My Shadow”, which was then cancelled. I then had the opportunity to animate on another “KFP” short called “The Secrets of the Scrolls”. I helped designing characters for the CG feature “The Angry Birds Feature”, based on the famous game of the same name, and for Laika I worked on “Kubo and the 2 Strings” as character designer, also I did 2D animation tests. I am currently working as a character designer on “Angry Birds 2” and as an animator on Disney’s “Mary Poppins Returns”.